Feeling in a sporty mood? What could be better than a sports watch 🙂  An automatic Rally Custom to be exact – well, actually two! Citizen added the Rally Custom model to its Seven Star range around 1969, using a hacking version of the 52 movement (18,000bph), with 25 jewels it’s designated 5290. My example is from April 1969: 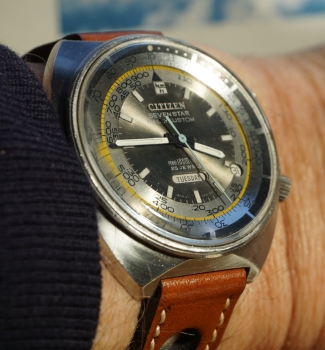 In 1970, Citizen added a Rally Custom to its Custom V2 range – using the same case, but with a 72 movement (21,600bph), this time with 23 jewels. Again it’s a hacking calibre, designated 7290. These are even rarer than the Seven Star version in my experience, and one variant features a nice very dark blue dial. Although looking black in many lights, with sunlight it shows its true colours: 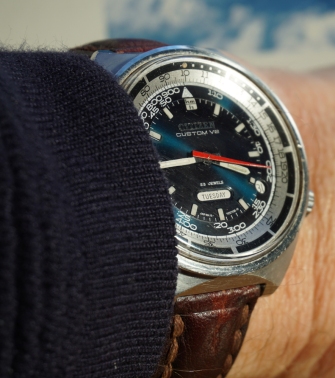