From August 1968, today’s watch is a little known relative of the better known Crystal Seven and Crystal Date – and is the ‘Compact’. The same movements were used in the Compacts, namely the 52 with both date and day, and the 54 with date only, but the Compacts don’t have the hardened mineral glass crystals that were first used in the Crystal 7’s and Crystal Dates in 1965. So these would have been a cheaper range of watches, launched a little later, in 1966. The dials feature an applied shield shaped logo, marked ‘A’ (i.e. automatic) with printed decoration around it, as found on Crystal Date dials. Typical of that era these run at 18,000 bph, and have a quick-set mechanism for the date – as far as I know they came with either 17 or 21 jewels.  Mine has a black dial, very clear numeral markers together with smart lumed hands and lume dots on the chapter ring – it’s also on an original bracelet: 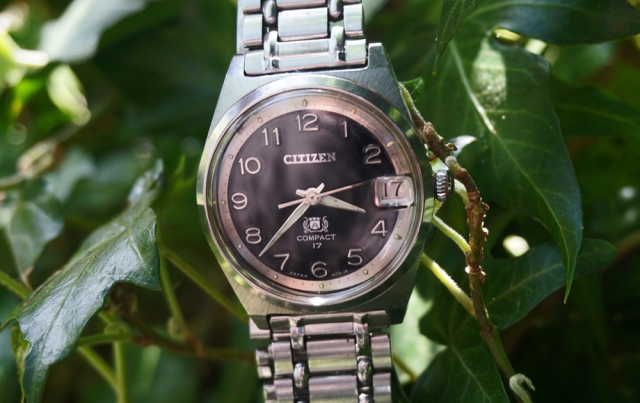 Here’s a reference pic (with acknowledgement to the owner) of a 21 jewel day/date model, with the date in an unusual position:

There is one model that is particularly sought after by collectors – it’s not a diver but the external bezel immediately catches their eye 🙂  Two versions were made for sure, both with 17 jewels, featuring either black or red bezels – these are quite rare pieces, especially in good condition. I have seen other variants with a polished bezel or a different dial, but I can’t be sure they are all original. Here are a couple of reference pics of the definite ones (with acknowledgement to the owners):