Although recent Featured Watches have been higher grade models – a Chronometer and a couple of ‘Super’ examples – Citizen’s mid-grade offerings can also give very good performance. This week’s watch is one of those; from the Seven Star range it runs flawlessly and has not required any time-keeping adjustment over a two week period.

In 1965 Citizen launched the relatively well-known Crystal Seven range of automatic watches, using a variety of 52 movements. At the same time, the less well known Seven Star range was launched, using the 5270 and 5290 movements with 21, 23 (5270) and 25 (5290) jewels. As with the Crystal Seven, the Seven Star range featured ‘Custom Deluxe’ models which had less traditional design features such as split day and date windows and larger ‘cushion’ cases. Today’s example is one of the Custom Deluxe models, which use the 23 jewel version of the 5270 calibre: 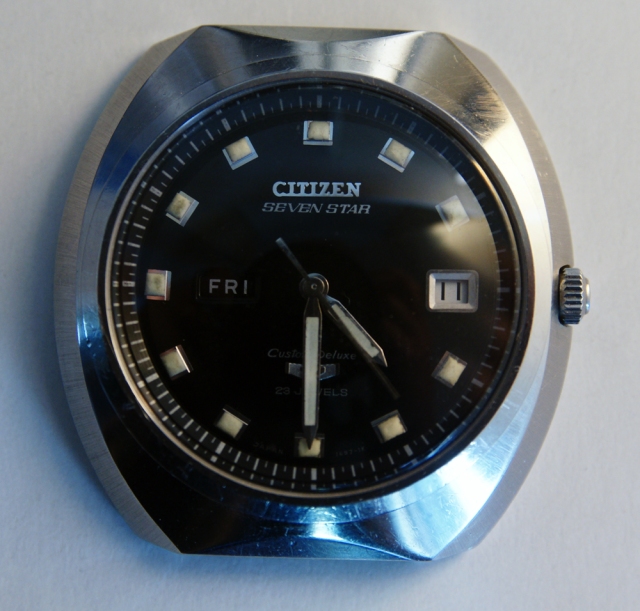 This model has a very diver-like black dial, with large lumed hour markers and wide, fully lumed hour and minute hands, but with a standard second hand. The lume still glows for a while too 🙂 Unlike the more traditional style of many of the 52 models the cushion case is large for its day, at about 45mm excluding the crown. Somewhat idiosyncratically the split day and date windows are different, with no frame on the day side. The black and white day and date wheels are also unusual – but they are the original ones, as per this ad from back in the day: 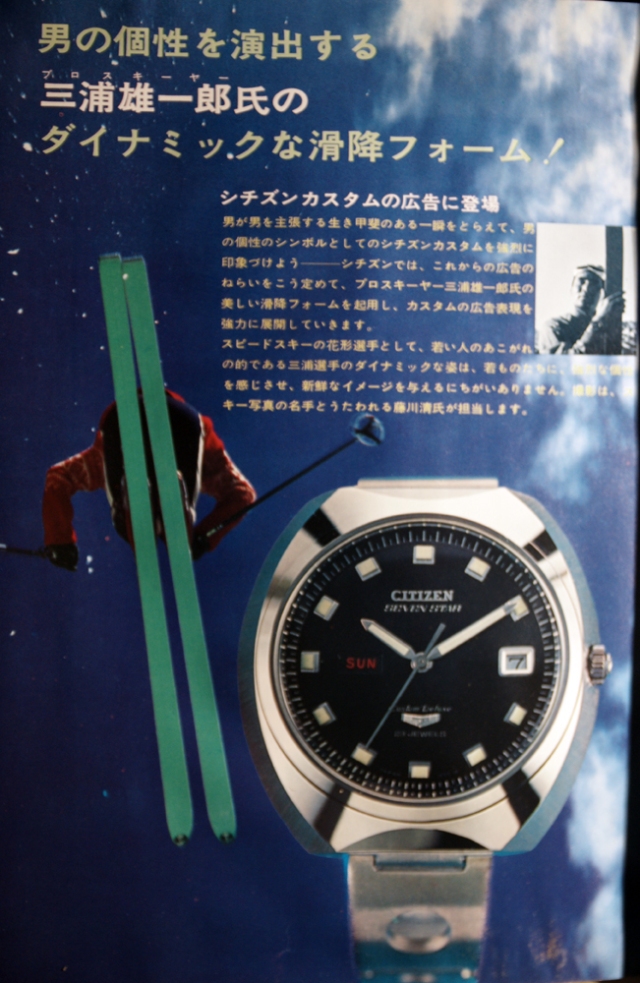 My example has been regularly worn, and the mineral glass was scratched and chipped, but Yahoo Japan came up with the goods in the form of an original unused glass: 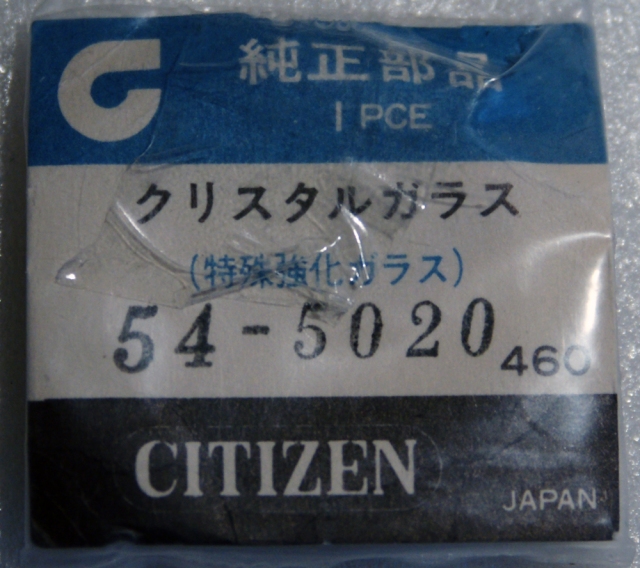 Crystal replacement is straightforward (good job since I did it 🙂 ). After removal of the movement the bezel is carefully prised off, fortunately exposing an undamaged crystal gasket, and the new crystal goes back in. The dial is gloss black and is in very good condition: 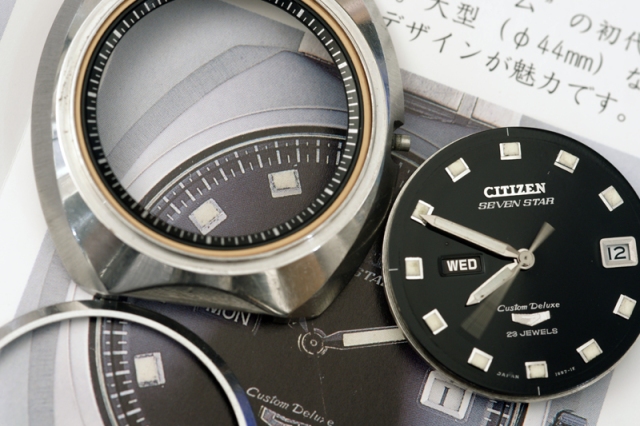 The bezel is pressed on, with a satisfying click – I have a set of original Citizen nylon(?) dies which are crucial for this task. Inside the back is a watchmaker’s service date of H (Heisei) 13-1-15. This is 15th January 2001, as derived from the current Emperor’s rule who came to power in 1989. However, the year is calculated from 1988. I understand that ‘Heisei’ will be Emperor Akihito’s posthumous name – his father was Emperor Hirohito whose posthumous name is ‘Showa’: 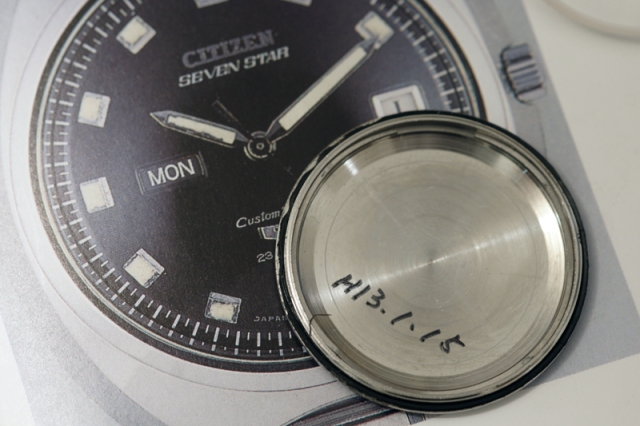 The 23 jewel 5270 movement is running very well, and looks clean and in good shape. The 52 family of movements run at 18,000 beats per hour, with quick set date and the day set first by winding back and forth past the 12 o’clock mark. The movement doesn’t ‘hack’ – although the 25 jewel 5290 does have that feature. The automatic movement can also be hand wound: 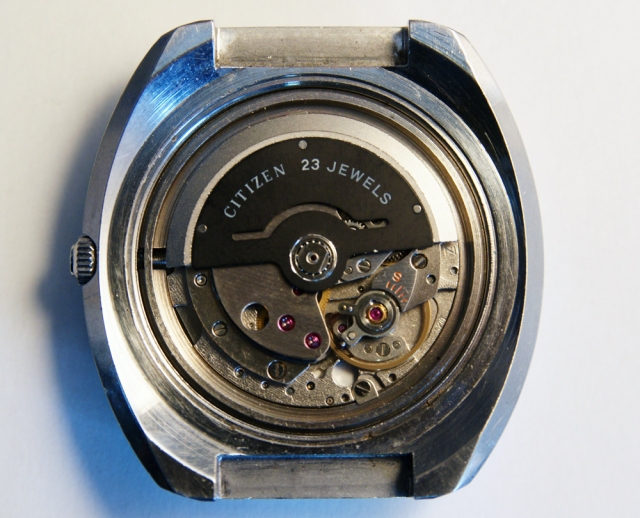 The case back gives a production date of August 1968, but has the older style case/model number of ACSS 3201 – I believe these can also be found with the later style case number of 4-520211. Nice to see the Seven Star logo repeated on the back: 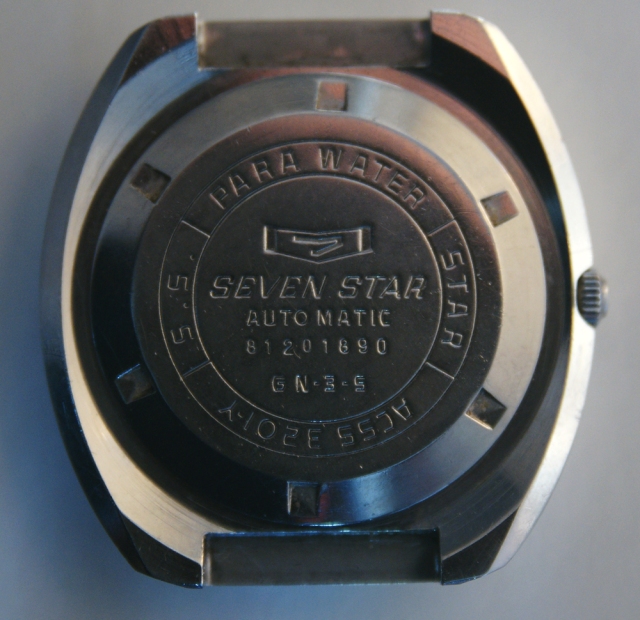 My example didn’t come with its original bracelet (see the ad above), so I’ve put it on a non-Citizen vintage bracelet which I think suits the style of the piece: 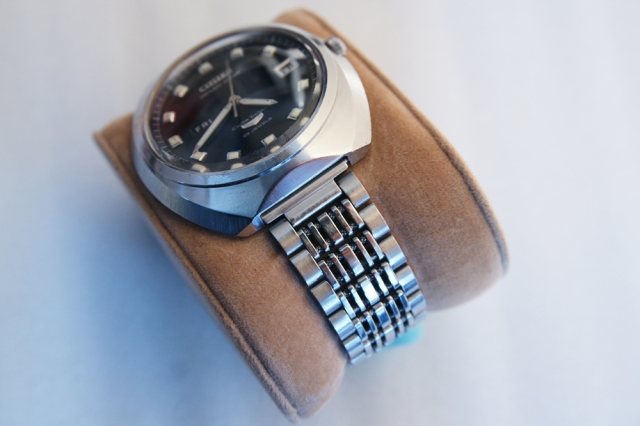 The watch is very comfortable to wear, whilst the strongly contrasting hands / markers / date disk also make it very easy to read. The only weakness is the black day disk which can be hard to read – fortunately I usually know what day it is…

This watch is a good example of a fine time-keeping piece that hasn’t cost too much money. In good condition and serviced properly the Seven Star line, and the Crystal Sevens too, can give very good service. 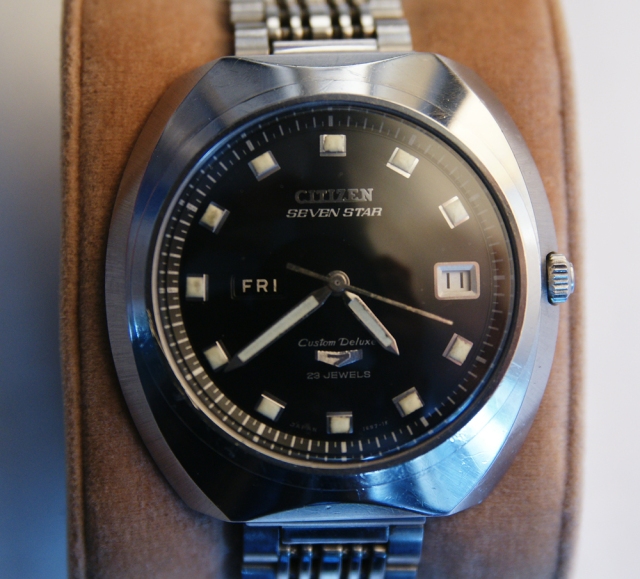